Haiti Still in Ruins - One Year After Earthquake 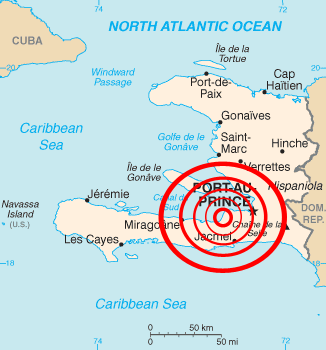 One Year After Earthquake, Haiti Still in Ruins

A year ago, the people lived under plastic tarps or tents provided by aid organizations. Today, some of the structures are more permanent, made of tin and wood.January 12th marks the one-year anniversary of the earthquake that devastated the Caribbean nation of Haiti. One-year later, reconstruction is moving at a snail’s pace, millions of people are still without a permanent home, a cholera epidemic has killed thousands, and the recent first-round of the presidential election is under investigation for fraud.
Only an estimated five percent of the capital’s rubble has been cleared, and many streets are still blocked by debris. Makeshift camps in and around Port-au-Prince house more than a million people.
We met 33-year old Jacques Pierre, who has been living in a tent for the past year. A small bed, a five-gallon bucket of water, and some cooking pots are his only worldly possessions. A few pairs of jeans and tee shirts are in a pile on the bed. Unemployed, he survives on food coupons provided by aid organizations and the generosity of neighbors. And he appears tired and worn from the year of uncertainty.
"I am frustrated because there is nobody that is going to come around here and give us help. The whole situation is hopeless," he said.
The camps are also increasingly dangerous, particularly for women. According to the human rights organization Amnesty International, violence against women and sexual assaults are on the rise.

As we were leaving Jacques Pierre's tent, 20-year-old Manuella Laurent walked up to us. Upset and angry, she said two young men just put a knife to her throat and took the food coupons she was given by an aid organization. Tall, lean, with purple highlights in her hair, she leaned closer to show us the scratch on her neck where the knife was held.

We asked her if violence was common in the camp. She told us several nights ago when her mother was away, three young men with guns pounded on the door of her shelter demanding sex. Neighbors heard the scuffle and scared the men away.

Adding to Haiti's misery is the cholera epidemic that so far has killed 3,500 people. The only bright spot: officials are cautiously optimistic the epidemic is diminishing in many parts of the country.

At a cholera facility in Port-au-Prince, Norwegian doctor Karine Nordstrand showed us some of the treatment tents. Rows of patients lie on wooden beds with circular holes cut in the center so they can defecate into buckets below.  IV bags full of saline solution hang over their heads.

Dr. Nordstrand tells us it is usually three to four days of treatment and patients are back on their feet. At this facility the number of patients is on the decline. "Last week we had about 40 or 50 new patients per day. In the whole center now we have about 120 patients. And as compared to earlier, the week of Christmas was about 110 new patients per day," she said.

As the anniversary of the earthquake nears, frustration over the lack of progress in the country is spilling into the streets. There are now daily protests against the government of President Rene Preval.

Down with Preval they chant.  They march through the streets picking up more protesters block by block. As they pass a white tour bus stuck in heavy traffic, one man pulls out a can of spray paint and writes, "Down with Preval" in red paint along the side of the bus. Police riding in a pick-up truck 10 meters away look-on and do nothing.

Former Port-Au-Prince mayor and opposition leader Evans Paul also blames the Preval government and the political process for the lack of progress. We met him in the yard of what was his very large house on top of a hill overlooking the city. The house, now a pile of rubble, was destroyed in the quake. He was trapped in the rubble for 30 minutes before being rescued.

"The first problem is there is a major mismanagement problem. Instead of the government trying to work toward solving the problems the people face, they are consumed with trying to hold on to power," says Paul.

Others say it is not that simple. Matthew Cochrane with the International Red Cross has been working to build 360 transitional shelters in Port-au-Prince.

He says the government was turned upside down from the earthquake like everyone else. Workers were killed, offices were destroyed, and records lost. He says something as simple as acquiring legal title to the land a project is built on is now very complicated. And similar logistical problems have slowed rebuilding efforts across the board.

"The last thing you want to do is to complete a construction project and provide people with transitional homes, good homes, and then a landlord turns up and says you had no right to build here. I want this torn down," he said.

But Cochrane also acknowledges clarity in the political process will speed up rebuilding the country. "There needs to be a credible trusted functioning central government that not only clearly lays out the direction that they want this country to go, but can also be a credible partner for the international community and the international donors," says Cochrane.

But Haiti faces a prolonged period of political uncertainty. The electoral council has signaled it will delay the second round of the presidential election until the Organization of American States investigates fraud allegations in the first round. There is also pressure to nullify the election entirely and start over.