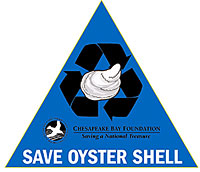 
The Chesapeake Bay Foundation (CBF) needs your help–and your oyster shells–to restore native oysters in the Chesapeake Bay. Donate your empty shells to CBF so we can recycle them into more oyster reefs and repopulate the Bay with more oysters. Oyster shells are literally the foundation of our reef restoration efforts!


Oyster shells are becoming increasingly scarce. Through CBF's Save Oyster Shell program, shells that would typically be thrown away are saved and used in a variety of oyster restoration projects.


Your shells are used as homes for baby oysters (spat) like the shell in the photo. We place your recycled shells in tanks of water with millions of microscopic oyster larvae swimming and attaching to the shells. After a few days the spat-on-shell will be used to build a new oyster bar.


Maryland Public Drop-off Locations
CBF has two shell drop-off locations in Maryland, one at our Oyster Restoration Center in Shady Side and the second at the Philip Merrill Environmental Center in Annapolis.


More Ways You Can Help

Volunteers are needed to collect shells from Virginia restaurants and drop them off at CBF oyster shell "curing" sites in Colonial Williamsburg and at the Virginia Institute of Marine Science boat basin.


CBF also collects shells from oyster roasts and seafood festivals. We can provide bins and signage to minimize shells mixing with other refuse.


To participate or for more program information, contact Jackie Shannon at jshannon@cbf.org or 804/642-6639. Find out more about Virginia's program below.

The current Chesapeake Bay Foundation (CBF) oyster shell recycling program--Save Oyster Shell (or "SOS")--is an expansion of a successful shell recycling effort started in 2005. This program is a partnership among the CBF, restaurants, communities, and dedicated volunteers with a goal of restoring oyster habitat in Virginia waterways.


Baby oysters begin life as free-floating larvae but quickly settle to the bottom and attach themselves to hard surfaces, which is why you see oysters growing in clumps on pilings and concrete. However, their preferred place to grow is on other shells. Unfortunately, many of the tributaries in Virginia lack enough shell for baby oysters to find. CBF is working with local partners to help Hampton Roads individuals and businesses collect oyster and clam shells and place them overboard to help turn the tide on declining oyster stocks.


With the help of NOAA-Restore America's Estuaries, CBF will continue to expand the shell recycling program to include shell collection from oyster roasts and seafood festivals As well as more restaurants and citizen drop-off locations. The contents of these containers and storage sites will be collected twice per week and taken to a centralized location to cure, a process of drying and cleansing of bacteria.


After several months, these shells are used in restoration projects, such as building oyster reefs or constructing or in spat on shell production, a process that allows oyster larvae to attach to the shells and grow into a natural oyster reef.


For information about participating in "Save Oyster Shells" contact Jackie Harmon at jharmon@cbf.org or 804/642-6639.